Ethanol isn’t a recent development. It’s a green, sustainable form of liquid fuel, generated from natural products. The most common raw materials for ethanol are sugarcane, molasses, maize, wheat, or farm waste. Biogas burns as a clean fuel with barely any smell and no harmful emissions.It turns into water and trace carbon dioxide, so you don’t have to worry about exceeding safe CO2 levels indoors.

The ‘clean’ power of ethanol isn’t just environmental. It burns clean in a more literal way too, because it doesn’t produce smoke, ash, sparks, or embers. Some consumers worry it might be a fire hazard, because most ethanol heaters burn with a naked flame. That said, the flame is generally contained and recessed. It doesn’t spread far, which might limit the amount of heat your ethanol fireplace can provide. Many users supplement their ethanol furnaces with more traditional heat sources (such as wood or gas heaters).

Ethanol burners may be a tad curtailed in terms of functionality, but they offer a lot of psychological advantage. When you buy one, you know you’re conserving natural resources, and that warm fuzzy feel can begin to make up for the controlled heat of ethanol fireplaces in Sydney. But one place where your biogas flames can’t be beat is style. They have unusual,unexected design features. The Cocoon – as an example – is based on a spherical theme.

It comprises a glossy pod that calls to mind futuristic space ship ornaments. The Cocoon can be circular or ovoid, and comes in stainless steel, glossy black, or a mix of both. Designed for versatility, you can get a model that hangs down from the ceiling, stands on a one-legged pedestal, or seems to float in mid air as it protrudes out of a wall.  Of course you can get an ethanol burner that has a more traditional look, such as the Icon Nero.

Its design echoes your typical linear fireplace, but it has no glass fascia, and it edges out of the wall rather than sitting in a flush formation. The slight protruberance is helpful for partially shielding the flames against moving air. You can buy an ethanol heater that matches your design sensibilities. As a guiding principle, metalling, angular finishes create a contemporary, minimalist effect, while dulled bronzes, matte shades, and curves can feel more rustic.

Not everyone agrees the lack of a flue is an advantage, but some buyers prefer it this way. They don’t want the hassle of connecting pipes and tubes through their walls. Also, putting in a flue system isn’t as simple as joining its bits together. Their vents have to snake along surfaces or into walls. This may mean tearing down said walls, or accessing your home’s HVAC systems and air vents. It’s a far more disruptive procedure, and an expensive one too. You may have to refurbish the whole room, maybe even the whole house, depending on layout.

Ethanol furnaces don’t need any of this. You can buy them, position them, and they’re ready to use. Even if it’s a wall-mounted unit, it’s not an insert installation, so there’s a lot less fuss, and no chimney required. Instead, you could build a faux mantel around it, or simply erect a protrusion for the burning element to sit on, then put up decorative framework ‘walls’  around it, as done with Icon Nero units. Also, the flames on ethanol fires are real.

This may not seem that important. After all, modern gas and electric fireplaces are often equipped with realistic fire imitations. They even emit authentic-looking smoke, thanks to holographic technology and water-based features like Opti-Myst. These modern heaters use ultrasonic tools too, giving off the soothing (but false) sound of crackling flames. Ethanol burns true, though it doesn’t have any smoke or crackle. And users consider this a good thing. 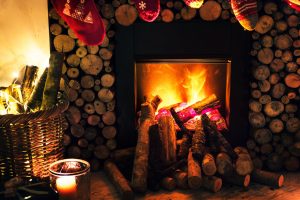 Ethanol burners can be freestanding, so they don’t need a professional to position them. They might require assembly, but it’s the kind you can do on your own. If you do opt for a wall-mounted model, it’s likely to use brackets for support (like flat screen TVs), and that only needs a power drill to set up. Pay extra attention to location though. You can use a spirit level (or a smartphone app) to make sure your fireplace is sitting at the right angle.

Also, unlike wood burners, ethanol heaters are easy to control, so you can monitor fuel use. You pour the amount you need into the fuel chamber, and when you’re done, just douse the flames. The unused ethanol remains intact and ready for its next lighting, unlike wood, which gets wasted because it has to burn down to ash. Ethanol canisters are lighter than gas bottles, so they’re easier (and cheaper) to transport.